Today’s post is another audio post, this time for Lansdowne Park. Please enjoy, and let me know what you think.

For a three-year period in the early twentieth century, the Aberdeen Pavilion in Lansdowne was the heart of hockey in Canada. The Ottawa Silver Seven dominated the league during the years 1903, 1904, and 1905 for a number of reasons. For one, the Silver Seven quit the Canadian Amateur Hockey League in 1903 in favour of the new Federal Amateur Hockey League, where their main opponents were the Montreal Wanderers; Ottawa had already been the defenders of the Stanley Cup, and so the Cup followed them into the new league.[1] This split had been brought about by the growing tensions between the fanatically amateur heads of the League and the Silver Seven, who, as author (and former Prime Minister of Canada) Stephen J. Harper writes, were known as “a gang not merely suspected of accepting pay, but employing dirty play as part of a deliberate strategy of winning at all costs.”[2] As non-scandalous as those charges may appear today, at the time it was a greater concern; the split allowed the rapidly declining CAHL to continue with its enforced amateurism (including banning baseball and lacrosse players, both known hotbeds of professionalism, from playing in the league at varying points) while the FAHL could move in a more professional direction.[3] Indeed, the Eastern Canada Amateur Hockey Association (ECAHA), the successor to the FAHL, dropped the word amateur from its name in 1909 after the final amateur teams quit the league.[4]

END_OF_DOCUMENT_TOKEN_TO_BE_REPLACED

Lansdowne Park: A Parade a Day… (All Things Must End) 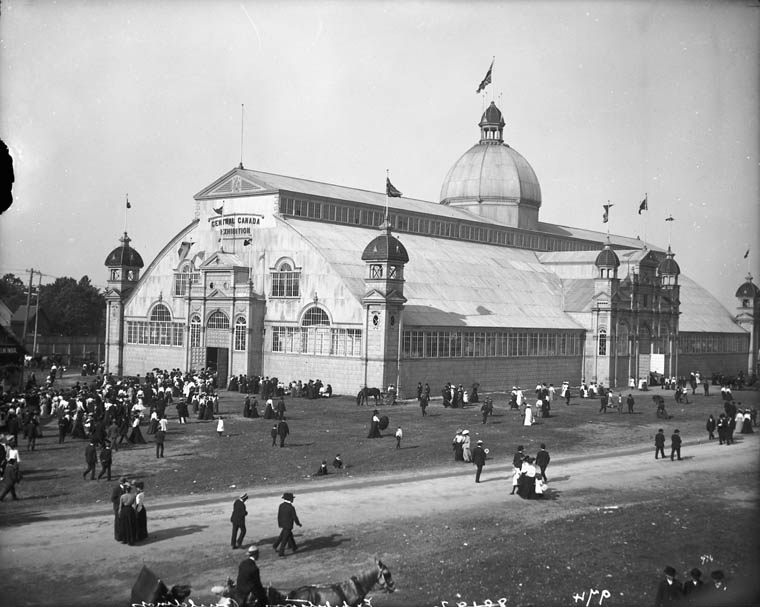 For over a hundred years, the Central Canada Exhibition took place annually in Lansdowne Park. As it was located in Canada’s capital, it quickly became an important attraction and a vital aspect of Ottawa’s cultural life. Canadian and global notables often attended; Canadian Thomas Ahearn, who invented what was likely the first electric oven (though he receives little credit for this fact outside of Canada) demonstrated his device at the fair in 1892, for example.[1][2] The first electric lightbulb in Canada made an appearance as well;  the Red Devil, one of the first airplanes in Canada, was flown overhead in 1911 (the organizers attempted to get John A.D. McCurdy and his significantly more famous Silver Dart to make an appearance, but he was busy at the time).[3] The Exhibition was often host to a large number of visitors; 20,000 people attended an 1889 show which saw Professor Baptist Peynaud leap off a 150-foot high tower into a safety net, for example; the population of Ottawa at the time was 44,000.[4]